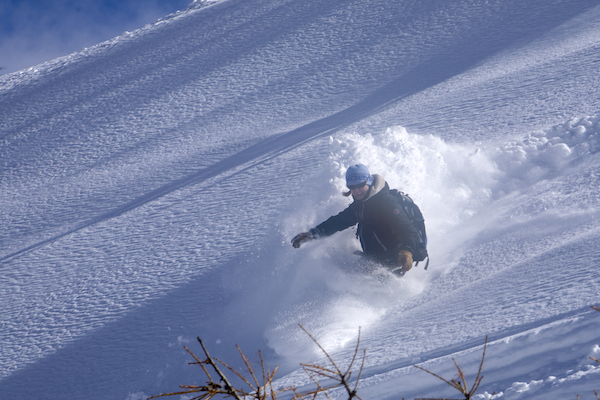 17 Dec Snowboarding in Europe, why?

Posted at 09:43h in Videos by Danielle Stynes

Why we love our snowboarding in Europe

We love snowboarding in Europe. Here, skiers and snowboarders still seem to be able to co-inhabit.  Snowboarding gives you something that skiing does not. It is physically more demanding: the balance, awkwardness, the fear, the pain from the position that is less natural. A moment of inattention on a snowboard and you will find yourself on the ground, and generally it’s not a gentle landing.

No pain, no gain

We get many requests for snowboarding safaris in Europe. This may be because I, as the founder of Swisskisafari, have been a snowboarder for the last 20 years.  A part of Swisskisafari’s conception was down to the frustration of people telling me what I could and could not do on a snowboard. Guided off-piste skiing was for skiers at that time. Options for snowboarders became limited as the guides would choose routes which were very challenging for snowboarders as they were adapted to skiers. I would go with my skier friends, following guides who would stop in areas where snowboarders could not launch from after the pause, amongst other moves. That elevated tension.

After many gut-wrenching, physically demanding snowboard descents in the Alps, heli or not, I finally learned enough about the wilderness environment to be able to help the guides guide snowboarders. We worked out how to indicate alternative paths off-piste. A small adjustment would make the route perfect for snowboarders: a breakthrough. Thankfully, now the years of aching muscles and calf cramps on long traverses have paid off. Don’t get me wrong, snowboarders still take on a higher physical challenge but do it for the best path possible and they rarely complain. This is why I love snowboarders and snowboarding in Europe.

A final note about my beloved snowboarding in Europe

Two years ago I decided to pick up my skis again. I wanted to sharpen my skiing skills to the same level as my snowboarding. I have to admit that there are some days when I think how tough a day’s skiing would have been on a snowboard. However, my best days of the season are still when I get back on that board. Suffering and enjoyment take me to another higher plane. One that makes me feel alive like no other sport, and I feel privileged to be present in the moment and still physically able to do it.

This feeling brings me back to the Swisskisafari motto… “Someday we will not be able to do this but today is not that day.”

To all those snowboarders out there who are still on their snowboards, well done, hats off.  I get it. Kudos to you all. I am your number one fan.

Let us plan a magical snowboarding safari for you.

Warm regards from the mountains,

BACK TO BLOG LIST
We use cookies to ensure that we give you the best experience on our website. If you continue to use this site we will assume that you are happy with it.Ok