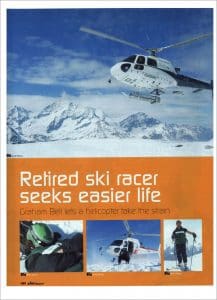 Ski and Board UK

Ski and Board UK Swisskisafari feature

A SKI RACER’S LIFE is usually too busy – and his pockets too empty – for heliskiing to play much of a part in his early career. In any case, powder skiing – much as I enjoy it – doesn’t come to your rescue when you are hitting speeds of up to 80 mph on a near vertical ice-rink. So it was quite a treat for me to spend some time in the Swiss Alps following part of the haute-route with a helicopter doing most of the work.

The resorts of Verbier, Zermatt and SaasFee look rather different from the air, and you get a very different perspective of such familiar peaks as the Matterhorn, Dent d’Herens and Dent Blanche.

Our heli-odyssey last spring began as our Aerospatial Squirrel settled like a giant dragonfly on the Tête de Valpelline glacier, at 3802m (12,474 feet). I am not used to being under the command of another skier on the slopes, but I realised that when you go heli-skiing someone has to be in charge, and I can’t claim that years of ski racing give you as good an all-mountain safety background as years of guiding. So I was content to let Sébastien Devrient, a French guide working in the Swiss Alps take control of my destiny – and my skis. Apart from guiding us down numerous Swiss glaciers, it was Sébastien’s job to keep me and other members of the group from falling down a crevasse and out of the paths of any avalanches that might have decided to make life difficult for our group.

So I was more than happy for him to unloaded our skis while we waited in the helicopter to jump out and join him. On his signal, we all piled out of the chopper and huddled in the snow, close to the machine and hopefully out of harm’s way, making sure the pilot, Roland, could see us and thus avoid scalping us as he took off.

There is nothing quite so sweet as the silence which ensues when the great cacophonous machine in which you have just arrived on the roof of the world roars into the distance, leaving everyone at the top of a spectacular descent which countless turns will scarcely exhaust. Between the sound of the departing helicopter and the whoops of joy from the group, there are a few seconds of almost spiritual silence.

Right in our faces is the most amazing scene: what looks the whole of the Swiss Alps, including dozens of peaks that are more than 4,000 metres high. This may not be quite the Himalayas, but it’s a close-run thing. There is some good heli-skiing in the Himalayas, as it happens, but however exotic that may sound, it’s a hell of a long way to travel for something you can do within an hour or so of Geneva!

As an ex-racer, this is quite tough for me, as I have had to learn not to overtake everyone in sight!’

Descents in the Alps are just as long and just as technical. Crevasses can be almost anywhere, and are often invisible to the untrained eye. Sébastien seems to know his stuff, and although cautious, lets us ski with as much freedom as he can. It’s may not be infallible, but he knows pretty accurately where the crevasses are lurking. At other times, when he’s pretty certain it’s safe, he sets the safety margins: we are invited to ski either to the left of his tracks, or to the right. And skiing past him is definitely a no-no. As an ex-racer, this is quite tough for me, as I have had to learn not to overtake everyone in sight!

“Never ski below me” he urges. “If I have stopped, it could be because it’s unsafe to continue. There may be crevasse right in front of me, or there might be avalanche danger.” This is the exact opposite command you would give when teaching a group of beginners as you do not want someone wiping out your whole group from above!

Back in the chopper, we fly past a mountain called Le Parrain (The Godfather, 3210m), the Pantalon Blanc, and the frozen Lac des Dix till we reach Mont Blanc de Cheilon (3869m), with its extraordinary hanging seracs. Almost immediately, we fly over the vast Serpentine Glacier, a well known landmark on the Haute Route, before landing high on the Pigne d’Arolla (3772m).

‘Right in our faces is the most amazing scene: what looks the whole of the Swiss Alps, including dozens of peaks more than 4,000 metres high’

From here we ski all the way down to the tiny resort of Arolla for a much-needed picnic lunch. Refreshed and, like the helicopter, refuelled, we take off again and head for the Ober Gabelhorn (4063m ) before returning to civilisation at the top of Zermatt’s Rothorn area. Here we skied on groomed slopes again. How odd it felt to be back in a ski resort. To be honest, it was rather an anti-climax, and it was almost a relief to climb back into the helicopter (actually, it was a different helicopter this time, but you’ve seen one, you’ve seen them all – just like London taxis! And helicopters are really just that – expensive taxis to untracked powder!)

We had started the tour at the Chalet Adrien, a Relais and Chateaux hotel in Verbier. We ended it in the Ferienart Resort and Spa in Saas Fee, surrounded by the highest mountains in Switzerland. And we’d ticked all the boxes: great skiing, stunning scenery, luxurious accommodation. And food – though not crevasses – to die for! I could get used to this heli-skiing lark.

Swiss Ski Safari (www.swisskisafari.com Tel: +41 27 398 21 94 ) offers a variety of all-inclusive ski packages (excluding flight to region) including all breakfasts and 4 out of 5 lunches and dinners with cocktails and wine, plus all helicopter flights and insurance, and five days’ lift passes, the services of a ski guide or instructor and all transport to and from ski areas.

Graham Bell skied part of the ‘Ultimate Journey’ – from Verbier, Zermatt to SaasFee, Switzerland 4 Days/ 5 Nights in fourstar hotels: Two nights in the Chalet Adrien, Verbier, two nights in the Hotel Zermatterhof, Zermatt, and one night in the Ferienart Resort and Spa, Saas-Fee. Trip price approximately £4,675 per person (single supplement US $770 per person)

Swiss Ski Safari also offers bespoke heliskiing and can provide private jet storage facilities and customs for travellers who prefer the convenience of flying directly into Sion plus chauffeured cars to and from the airport. Flights to and from Switzerland are not included in the price neither are the train tickets to the destinations. Swiss Ski Safari collects clients from their final train destination and drops them off at the nearest rail station to their final day’s skiing.