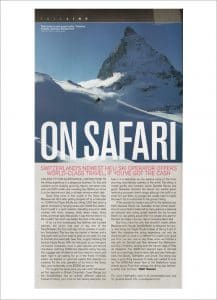 Unless it’s for sustenance, linking food to the skiing experience is dangerous business. Do that, and suddenly you’re studying grooming reports, one-piece suits and runs that’ll contain your swivelling hips. Before you know it, you’ve become your Dad, or at least someone else’s Dad.

Good thing that none of that counts in the Swiss Alps. Because last April, after getting dropped off by a helicopter at 12,434-foot Pigne d’Arolla and skiing 5,500 feet down a glacier enclosed by hanging seracsand needle-like peaks, I found myself in a quiet meadow marveling at a picnic table covered in stinky cheeses, thinly sliced meats, Swiss wines and those tasty little pickles. It was the first time in my life I couldn’t tell which was better: the food or the skiing.

A far cry from scavenging the free saltines and mustard packets, the picnic was part of day two of the Swisskisafari, the first multi-day heli ski operator in southern Switzerland. The four-day trip started in Verbier, and a helicopter took us from peak to peak as we made our way to Zermatt and eventually Saas Fee, roughly following the famous Haute Route. With the helicopter as our transport, we buzzed unbearably close to giant glaciers and around mountains, notching 6,000 foot descents along the way. Our luggage was shuttled by van from resort to resort, and each night it sat waiting for us in the finest of hotels, where we feasted on gourmet cuisine that shamed my modesty. It’s the only operation of its kind in the Swiss Alps and, incidentally, costs $7,900 per person.

For roughly the same price, you can notch heli-assisted first descents in British Colombia’s Coast Range, but the Swisskisafari has an entirely different objective. Instead of losing your mind on hair-raising descents, you lose it in a helicopter as you explore some of the most stunning mountainous scenery in the world. The skiing is mostly gentle, and company owner Danielle Stynes and guide Sebastien Devrient are almost too careful about restricting an expert skier’s range, although the outfit is so small (it’s just them, so groups are usually kept to eight) that each trip is customized to the group’s liking.

If this sounds too hauteur and soft for the hardcore set, that’s because Stynes (an Australian ex-pat whose experience in luxury travel is balanced by many years as a seasonal ski instructor and cycling guides) markets the trip for – and there’s no way of getting around this – rich people who aren’t in the best ski shape. Like your Dad, or someone else’s Dad. But if you have the coin, that shouldn’t matter, either. Because though Swisskisafari is designed for luxury – and flying the Haute Route instead of hiking it sort of feels like cheating – the skiing experience can only be characterized as once-in-a-lifetime- no matter how good you think you are. Like on day three, when we hitched a ride with Air Zermatt and flew between the Matterhorn and the Dent d’Herens, landing atop the narrow ridge of Tete de Valpelline. The 4,900-foot descent back to Zermatt took us unnervingly close to serac falls and over three glaciers: the Stockji, Tiefmatten, and Zmutt. The skiing was easy, a good thing because I’d really just wanted to look up. The 6,000-foot sheer face of the Matterhorn stood directly above. From that vantage, the skiing was definitely better than the food.