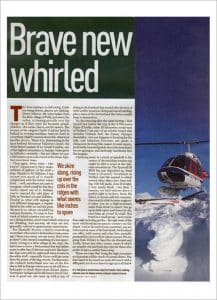 The wine tasting was in full swing. Corks were being drawn, glasses were clinking. Henri Valloton, the wine-maker from the little village of Fully, just down the valley, was fussing proudly over his charges as if they were his favourite grandchildren – the wines, that is, not the tasters. The terrace of the elegant Chalet Adrien hotel was bathed in evening sunshine. And yet…..what was it that was slightly unusual about this otherwise familiar picture? Ah yes, there it was, shimmering in the haze behind M.Valloton’s head; the white-fluted summit of Le Grand Combin, one of the highest mountains in Europe. Vines grow on hillsides, certainly, but not where we were, 6,000 feet up in a ski resort in the Swiss Alps. Not even Swiss wines.

And then again, Swiss wines – who knew? Apparently they make 26 million gallons of the stuff. Thanks to M. Valloton, I can assure you much of it stands comparison with the better wines from anywhere you care to nominate, which may well be why they hardly export any of it. Perhaps you have enjoyed the odd glass of Dôle or Fendant on your holidays. The trouble is, what with the Euro, signage in four different languages, a regular Babel in the cable car and ski areas themselves often straddling national frontiers, it is not difficult to lose track of which country you are in on a skiing holiday, never mind which wine you are drinking. Snow does not come with a regional accent and ski trips are not, generally, cultural or gastronomic experiences.

For Danielle Stynes, a 30-something Australian who came to Switzerland some years ago (“there was a man, not any more, don’t even go there” she dismisses enquiries about exactly how she ended up there rather than Earls Court), this seemed something of a lost opportunity. Living in a little village in the Alps, she had come to know a Switzerland that had rather more to offer than Toblerone and rösti. At the same time, as a nifty snowboarder herself, and having made friends with local guides such as Sebastien Devrient – of whom more in a moment – she knew that the Swiss alps were still the right stuff when it came to the white stuff, especially if you could get just a little bit away from the pistes of the big resorts. And furthermore, she had realised that Switzerland is one of the few places left in Europe where you can still take a helicopter to reach those more distant slopes. With a background in the luxury travel business, she came up with a way of skiing in Switzerland which she hoped would give skiers and boarders the best of both worlds; fantastic skiing and a taste of the Switzerland which the Swiss, canny lot that they are, usually keep to themselves.

So it was, the morning after the wine-tasting, that I found myself confronted with a tricky test of Alpine etiquette, just below the top of the 3,796 metre Pigne d’Arolle, some 20 kilometres south east of Verbier. There was us, an eclectic bunch which included Graham Bell, the Olympic downhiller, who just happened to be along for the ride, and Sebastien, our guide, a skiing and climbing film-maker of some repute, profoundly knowledgeable about the mountains we were gazing around at and dashingly handsome into the bargain. And there were the others, a posse of ski-tourers on the Haute Route, the classic high-level itinerary which takes you from mountain hut to mountain hut along the chain of peaks from Chamonix to Zermatt.

Clattering away in a cloud of spin drift was the source of the prickling tension that you could sense in the cold, clear mountain air, the Ecureuil B3 350S of Swiss Heli-Service which had just deposited us, fresh from a leisurely breakfast in Verbier, on to the self same summit that the others had been toiling towards from the Chanrion hut, with full packs, probably since first light. Do you know, for a moment there, I very nearly blushed. But then, I reasoned, we had a perfect right to be there since we were on the Haute Route too, or at least the downhill parts of it. Because Swiss Ski Safaris, as Stynes calls her company, does exactly what its name suggests; takes you on a high mountain safari from resort to resort. You go up by helicopter and down by ski; your bags go round by road. You travel in a small group – we were never more than eight including guides – through some of the most exhilarating mountain scenery on the planet. And at the end of your exertions, you are welcomed at some of the best hotels Switzerland can offer (such as the Chalet Adrien in Verbier or the Zermatterhof in Zermatt) with menus and wine lists specially prepared for you to reflect where you are. We went from Verbier to Saas Fee via Zermatt and Arolla; she has other routes, some of which are more of an out-and-back day trips for those who prefer to have a settled base camp.

Of course, this kind of pampering does not come cheap. But nor is it all high end gastronomy, impressive though that is. It is more about getting the best of whatever it is. One evening involved a raclette fondue, beloved of a thousand tour reps, which, frankly, I was dreading but which turned out to be a revelation when done properly with all the trimmings. More than that, these are trips which bring the high mountain environment within reach of quite normal skiers. You don’t have to be a hard-as-nails ski tourer with a 40lb pack. Nor do you have to sign up to all that macho ski-porn in magazines such as Powder. While you would not want to set off without a modicum of competence into an environment which, in its very remoteness, can be intimidating, not all mountains are built like the side of a house and many of the descents, which generally follow the line of the glaciers, are really quite gentle. The charming and confidence-inspiring Devrient, who is Swiss Ski Safari’s permanent guide, is keen to ensure you savour the overall experience – what Stynes calls “those pinch-me moments”. So he spends time identifying peaks near and far, pointing out the wildlife – we saw mountain hares and ibex among others – as well as route-finding and seeking out the best snow.

As for the helicopter, it is another artfully contrived piece of spin on the part of expert skiers (mostly in order to keep the machines to themselves), that going skiing by air is somehow not for mere mortals. However, once you start thinking of a helicopter more as your own personal ski lift and tell it to take you to the top of something within your range than to the top of the steepest north face in town it becomes an altogether different proposition. It is certainly a lot more fun than freezing your fingers off on a chairlift or getting up close and far too personal with a bloated Swede in a crowded cable car.

As it happens they cannot set you down absolutely anywhere. Instead, as part of a delicate compromise between the ski lobby, rescue training requirements and the powerful Swiss Green lobby, there are a number of pre-determined landing points in the Alps. But they have been chosen with a view to accessing the places you would want to go to anyway. The Pigne d’Arolla is one of them, at the top of a long and fascinating two hour, 2,000 metre descent all the way to the tiny hamlet of Arolla where we were greeted with a quite delicious al fresco picnic lunch of local delicacies, all laid out awaiting our arrival. Expert or neophyte, top skier or struggling intermediate, it felt pretty good when the chopper clattered in to collect us and take us on to our next destination.

The rides themselves are part of the experience. Normally, any commercial helicopter will go by the most direct route. But for this trip, Stynes has negotiated just a little leeway so that the pilots can show off a bit. So you skim along the Stockji glacier, just above the crevasses and seracs, you rise up over the cols in the ridges with what seems like inches to spare, you are whisked round the back-side of the Matterhorn, the side that skiers rarely see unless they are coming down the Zmutt glacier from the Tete de Valpelline. Massive blue blocks of ice hang from the sheer cliffs, ending in ragged edges from where great lumps occasionally break away into the void below. At eye-level and what seems barely a rotor’s length away, it sure beats the easyjet flight from Luton. We did indeed ski down the Zmutt glacier later, right down to the glacier’s snout under the towering lateral moraines lined up like soldiers on parade. And we did see an icefall break away thousands of feet above as the sun began to warm up the face. It stopped in some dead ground about a quarter of a mile away. We were never in danger; Stynes and Devrient take safety seriously, issuing each guest with a smart back-pack with avalanche transceivers, probes and shovels. You get to keep the back-pack which is a nice touch and a nice souvenir. But by that stage you have almost come to expect it. You hear a lot of claims about ultimate ski holidays; this one has more claims to it than most.

Swiss Ski Safari prices vary slightly depending on the route and the number of days. “The Ultimate Journey”, my itinerary, is US$7900 for five nights of luxury accommodation and four days of skiing, including all meals and wines, helicopter flights, guides etc. Check out their gorgeous web-site at www.swisskisafari.com or just call them on 00 41 79 239 41 52. You are quite likely to be able to speak to Ms Stynes herself as this is a small luxury operation and she takes customer care seriously.

This does not include your travel to the start point which will vary depending on which itinerary you choose. Swiss Ski Safari will advise you on where they will meet you which may be an airport or maybe the nearest railway station (eg Martigny for Verbier which can be easily reached by train from Geneva airport)

There are no scheduled flights to ski airports such as Geneva from Scotland but it is often possible to hop the many charters in season. Use a specialist agent like Ski Travel Service in Glasgow, 1100 Pollokshaws Road, Glasgow G41 3NJ, 0141 649 9696. Or you can simply connect to the zillions of flights from London airports.

In the Valais the Swiss canton which includes Verbier, they have regular cow, rather than bull fights. In the Combat des Reines, two cows – no humans involved – slug it out to establish who is the herd leader when they go up to their summer pastures on the Alps.