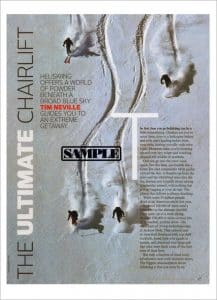 The first time you go heliskiing can be a little intimidating. Chances are you’ve never been close to a helicopter before, and now one’s landing inches from your nose, beating you silly with rotor wash. Moments later, you’re zooming up and over airy ridges and touching down in the middle of nowhere.

Out you go into the rotor wash again, but this time, you huddle like a Gore-Tex-clad commando while guides unload the skis. A thumbs-up from the pilot and the whirlybird rears into the sky, leaving you virtually alone among spectacular scenery, with nothing but gravity tugging at your ski tips. The silence that follows is always shocking.

While some 55 million people skied at an American resort last year, only about 100,000 of them used a helicopter as the ultimate chairlift. They spent up to a week slicing through 100,000 or more vertical feet of untracked, pristine snow—the equivalent of 24 top-to-bottom runs at Jackson Hole. They relaxed next to river-rock fireplaces with top-shelf cocktails, eased their sore quads in saunas, and discussed over king-crab legs what were likely some of the best runs of their lives.

But only a fraction of these lucky adventurers were truly fantastic skiers. The biggest misconception about heliskiing is that you must be an extreme X Games type to do it. With dozens of operators in the United States and Canada that offer trips for just about any ability level, the only truly difficult part is figuring out where to go and with whom. We can help with that. Trying to contain your glee at the end of each run? Now that’s intimidating.

Just about every heliskiing company offers packages based on the number of days and the vertical feet of skiing you can expect to log during that time. A seven-day trip—say, Saturday to Saturday—typically comes with 100,000 vertical feet of skiing, which breaks down to about eight long runs a day. Expect to pay about $100 for every 1,000 vertical feet you opt to do over that limit. You’ll get a refund or a discount on your next trip for unused vertical, should storms ground the helicopter. The trend these days is for outfitters to offer shorter two- and three-day packages that are much cheaper than dropping $7,000 or more for a week. Some ski resorts, like Vail and Sun Valley, team up with helicopter companies to offer just a day of heliskiing. Three helicopter runs based out of Whistler can cost as little as $612.

Places that ski the B.C. interior, like companies out of Golden or Nelson, generally enjoy lighter, fluffier snow. Coastal areas, like Bella Coola, tend to offer steeper skiing on snow that’s heavier, but less likely to avalanche. Not far behind B.C. sits Alaska, where steep, toothy peaks and yawning glaciers make for some of the most spectacular ski scenery high above the tree line. In the lower 48, companies run trips out of Nevada, Idaho, Utah, Washington, Wyoming and Colorado. In Europe, most heliski trips are daylong outings tacked onto a vacation at one of the resorts. Check out usheliskiing.com for operators in the U.S. and helicatcanada.com for more on skiing the Great White North.

Generally, March and April are the best months for first-timers, thanks to longer days and milder temperatures. Most heliski operators don’t begin flights until at least January to ensure a solid snow base. Going in January or February can mean a higher chance of storms and down days in the lodge, but going then also greatly increases your chances of finding the deepest powder you’ve ever skied.

Blasting through bottomless powder is dreamy—and exhausting. Companies like Telluride Helitrax (helitrax.net) and Canadian Mountain Holidays (canadianmountainholidays.com) offer packages that couple first-time powder skiers with powder-instructor guides who can show you how to save your energy making turns.

Other companies, like Mike Wiegele Helicopter Skiing (wiegele.com) and Valdez Heli Camps (valdezhelicamps.com), combine helicopter skiing with cat skiing—a method of backcountry skiing that uses tank-like grooming machines retrofitted with seats and heat to comfortably whisk you around the mountains.

For the best mix of skiing and après fun, head to Europe. SwisSkiSafari (swisskisafari.com) offers one of the most luxurious and unusual takes on heliskiing, marrying backcountry adventure with Old Country magnificence. You’ll spend mornings heliskiing big lines off 12,000-foot peaks near the Matterhorn, and afternoons flying to resorts like Saas Fe and Zermatt to ski the slopes, eat fondue and wander ancient streets.

Every heliski company will present you with the best snow that Mother Nature has produced that week, but there are differences between operators. In your hunt for the right trip, ask how many groups that helicopter will service each day. Three groups per helicopter is ideal.

More importantly, ask how many people will ski per group (generally 4 to 11, and fewer is better). A favorite among skiers seeking smaller groups, Great Canadian Heli-Ski (canadianheli-skiing.com), near Golden, B.C., puts only four skiers on each helicopter and offers them unlimited amounts of skiing. One group of fit skiers last year logged more than 140,000 feet in a week.

While big companies like Canadian Mountain Holidays have permits to ski in areas bigger than some countries, terrain size isn’t as important as finding out how many days the helicopters typically can’t fly due to bad weather, especially in the month when you plan to visit. Great Canadian suffered just three down days during the entire season last year. Like most operators, that company has access to lower areas that helicopters can reach even in poor skies.

The heart of heliskiing, however, lies in the high-alpine terrain, where the views and sense of remoteness are unsurpassed. Skiers who book a trip with Telluride Helitrax (helitrax.net) can get up to a breathtaking 13,500 feet in Colorado’s San Juan Mountains, enjoying the highest landing zones of any heliski company on the continent.

An average day of heliskiing might go like this: During breakfast, the guides will brief you on weather and snow conditions. At the start of the trip, they’ll fit you with safety equipment like an avalanche transceiver, then teach you how to use it just in case someone gets buried in a slide—it’s rare, but always better to be safe. They’ll then explain how to behave around a helicopter. (Never lift your skis off the ground near a whirling blade, for instance).

Now it’s time to hit the slopes. You’ll ski with a guide until lunch, then meet with other groups for a picnic in a wild alpine setting. Finish the day off with more guided skiing before dinner, beer and reminiscing at the lodge. Fly-in lodges are great for their sense of isolation, but staying in town—for example, in Revelstoke, B.C.—means you can wander around in the evenings. Either way, be sure to get plenty of sleep.

By far the best thing you can do to get yourself in shape for skiing is to ski as much as possible before your trip. StairMaster sessions and jogging are great, but only time on the slopes can truly prepare you. If you’re unsure of your abilities as a powder skier, book a trip cat-skiing first. It’s considerably cheaper—about $250 for a full day—and you’ll still ski plenty of deep, untracked snow. Selkirk Powder Company (selkirkpowderco.com) at Schweitzer resort, near Sandpoint, Idaho, runs cat trips right from the lifts, meaning you can warm up on a few groomers before hitting the backcountry.

Most heliski packages include rentals for skis that are fat, powder-worthy boards designed to keep you afloat and make turning easier. If you insist on using your own skis, make sure they are at least 80 mm wide underfoot, though 100 mm is better. Bring extra gloves, goggles, hats, long underwear—extra everything, really, as snow welling up to your neck run after run can get surprisingly wet. That said, resist the tendency to overdress. Unlike a chairlift, a helicopter is warm, so you might fog your goggles and spend the flight futzing with them.

Finally… Remember that you’re there for the fun, not a blown knee. There’s no shame in hopping a ride back to the lodge before the day’s done if you’re getting tired. The hot tub will be much roomier with just you in it, anyway.